Ireland’s capital city is a treasure trove of historical landmarks, so it’s not easy to know where to start when you visit Dublin for the first time. The centre of the city is fairly compact so it’s ideal for walking around and exploring, but there is a lot to see. It’s also packed with easily-overlooked historical sites in hidden corners or seemingly ordinary locations.

Previously on the blog, we discussed some historical places in Dublin before, suggesting a few unmissable sites to see in Dublin for visitors with an interest in the past, including Malahide Castle, Kilmainham Gaol, Dublin Castle and the Dublin Writers’ Museum. We’ve also recommended learning more about Ireland’s long brewing history on the Guinness Storehouse tour.

But today, we’re going to run through our list of the best historical sites in Dublin. If you’re going to spend a couple of days or more in the city then it’s worth trying to see them all, whether you opt for the self-guided route or take a historical walking tour.

The best historic sites in Dublin 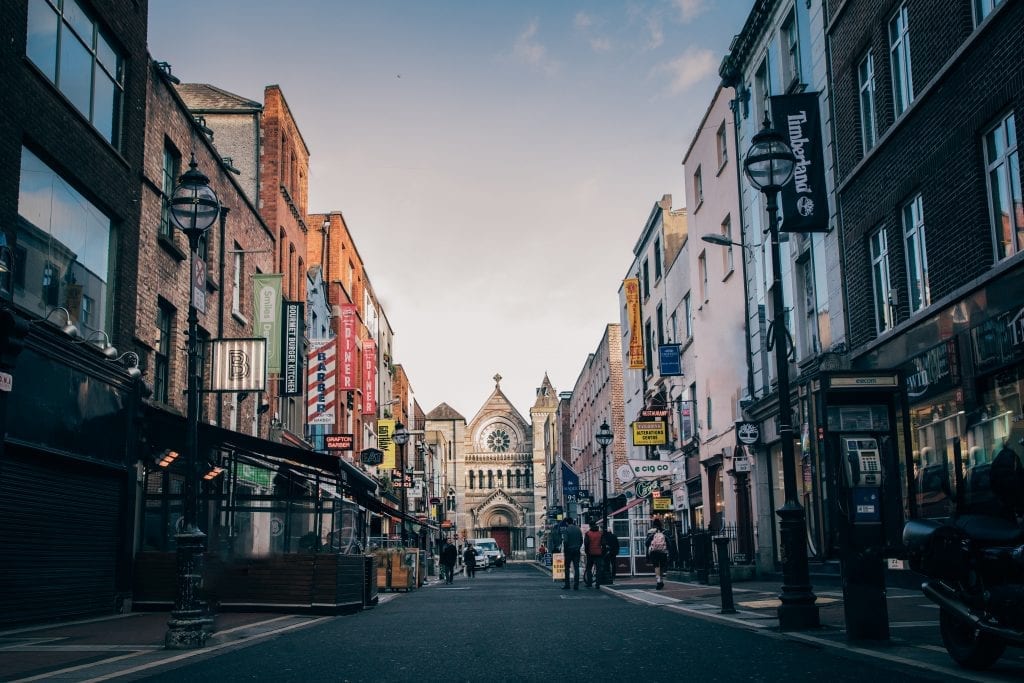 The story of a city is told by its landmarks. And Dublin has quite a story to tell.

From historic buildings, like Leinster House, to iconic Dublin monuments, such as the bronze statue of Charles Stewart Parnell, each monument and building in the capital marks a milestone in its lengthy, rich and turbulent history. So, without further ado, here’s our list of the most noteworthy Dublin landmarks: 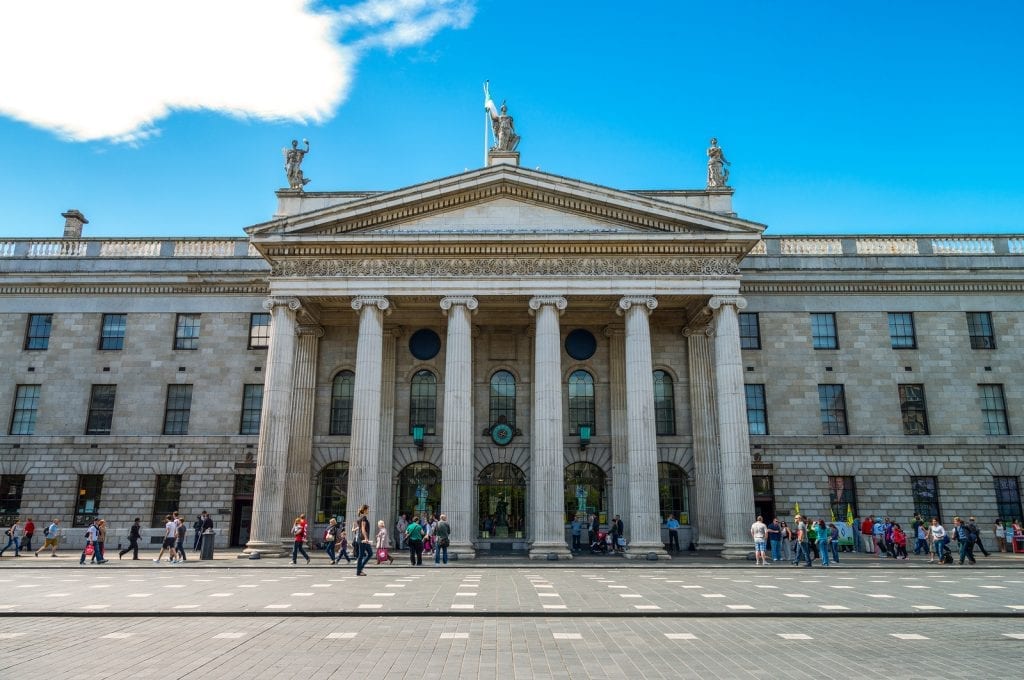 The General Post Office (GPO) on O’Connell Street is among the most fascinating and evocative of Dublin’s historic sites.

Designed in the Greek Revival style and still a working post office to this very day, the GPO is not just an architectural goldmine. As the main stronghold of the Irish volunteers in the Easter Rising of 1916, it’s also closely tied to Ireland’s struggle for independence in the earlier part of the 20th century.

Visitors looking to learn more about this seminal period in Ireland’s history are advised to get tickets in advance for GPO Witness History, a guided, one-hour immersive exhibition that takes participants through the chain of events in 1916 that ultimately led to the birth of the Irish Republic.

GPO Dublin opening hours: Monday to Saturday from 10:00am to 5:30pm

Looking for accommodation? Check out our hotel near the GPO 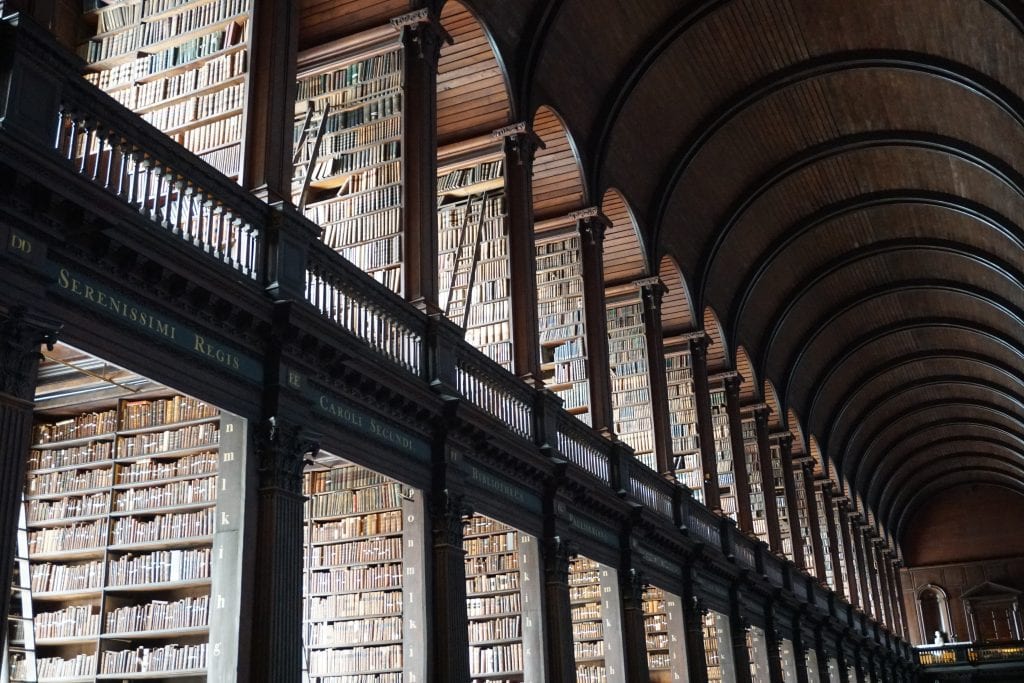 Trinity College Dublin is a university steeped in history and tradition and the alma mater of important Irish literary figures such as Oscar Wilde, Jonathan Swift, Samuel Beckett and former Irish president Mary Robinson. With such creative and illustrious figures, it’s hardly surprising that the university campus is filled with fascinating history.

It’s also home to one of the most beautiful and impressive libraries in the world – the Old Library at Trinity College. Whether you’re a bookworm or an architecture lover, you have to add this beautiful library to your must-visit list of Dublin historical sites.

The Old Library has long been one of Dublin’s most enduringly popular historical attractions, thanks in large part of its Book of Kells exhibit and the soaring architectural wonder that is the Long Room. Inside the Long Room, you’ll find more than 200,000 books stacked in floor-to-ceiling shelves spanning over 200 feet.

Fair warning: It gets crowded in the Old Library very quickly so it’s worth arriving first thing, especially if you’re looking to take some Instagram-worthy photos. 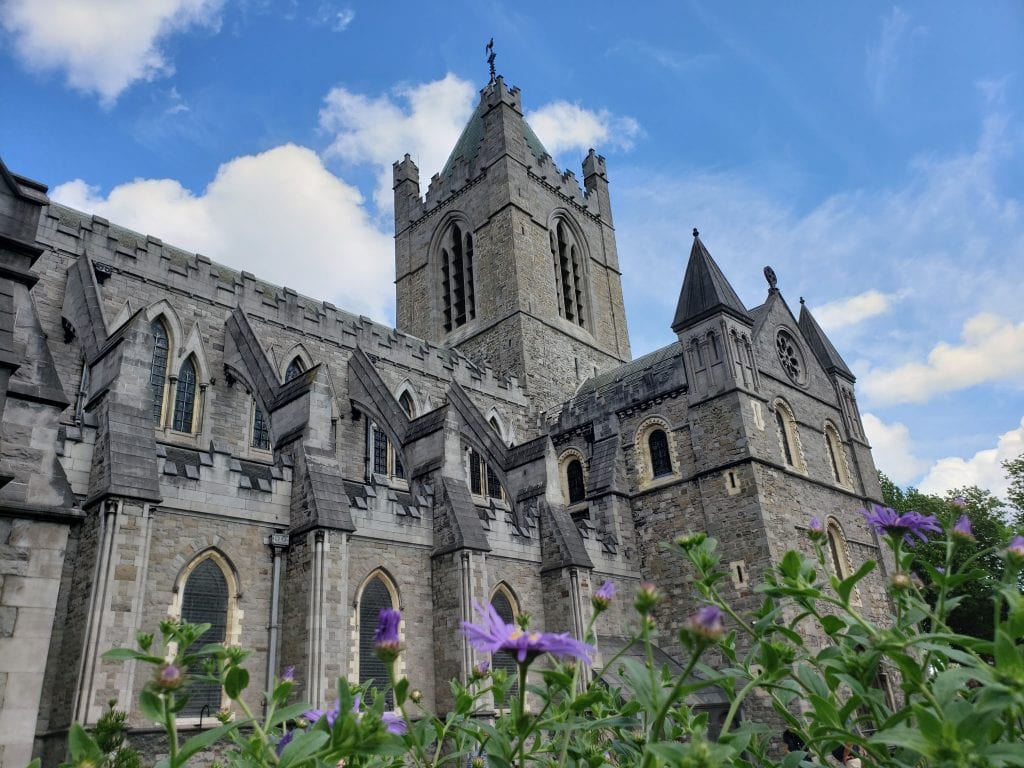 Popping your head into an imposing-looking church is a rite of passage for many of us on a city break. And as the oldest building in Dublin and largest and most famous of the city’s many churches, Christ Church Cathedral has long been a go-to historical attraction for many tourists visiting the city.

Located only 10 minutes from the Maldron Hotel on Kevin Street and 15 minutes walk from Maldron Hotel Smithfield, Christ Church is the perfect place for respectful visitors looking to find a tranquil spot in the heart of Dublin city. While Christ Church hosts regular services, you don’t have to be religious to visit the church. They also offer guided tours, which include admission to the crypt and a climb to the belfry for a bell-ringing session. 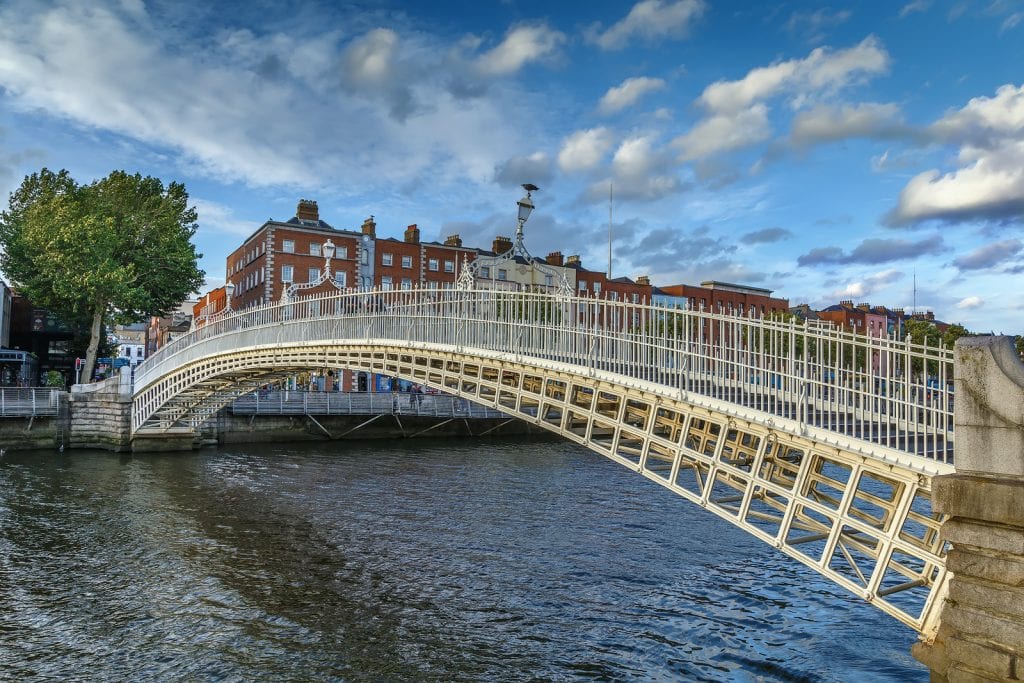 Chances are, most of the pictures you’ve seen of the River Liffey were taken from the Ha’penny Bridge, an elliptical arch bridge that stretches almost 150 feet across and one of the most photographed bridges in the city.

Connecting the northside and the southside of Dublin city, the first ever pedestrian bridge in Dublin has been in operation since 1816. For the first hundred years of its life, foot passengers were required to pay a toll of half a penny to cross – hence its nickname which endures to this very day. 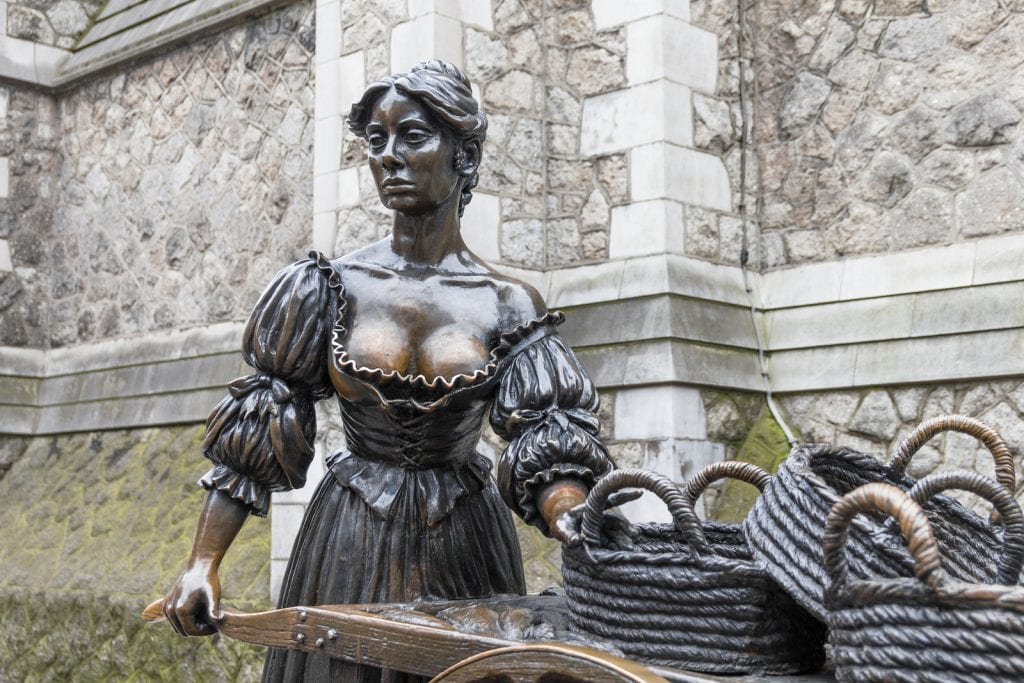 The countless sculptures and statues dotted around the cobbled streets of Dublin make for the perfect embellishments – we especially love the Famine Memorial sculpture in the Dublin city docklands and the statue of Countess Markievicz (the first woman elected to the British House of Commons) on Tara Street.

But our ultimate pick has to be the bronze statue of the eponymous, mysterious heroine of “Molly Malone”, a traditional Irish ballad of uncertain origins and Dublin city’s unofficial anthem. Molly, who “wheels her wheelbarrow” in the centre of Dublin’s Georgian Quarter, draws hordes of tourists with a love for Irish folklore her way on the daily. 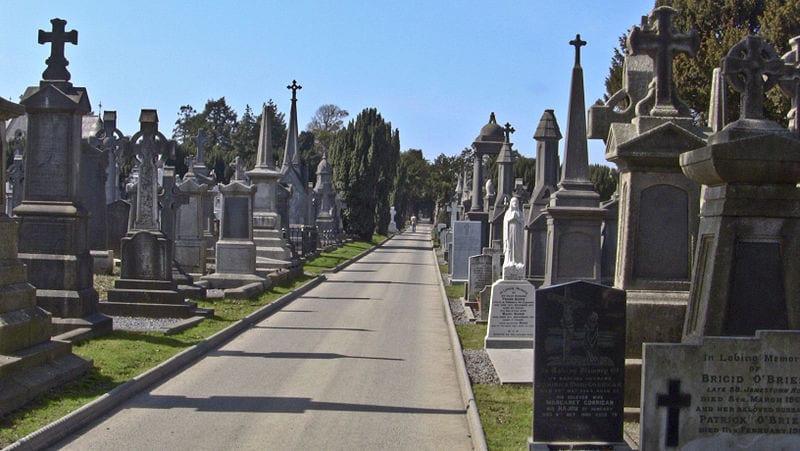 You’ll need to venture outside of the city to explore this fascinating, poignant and sometimes eerie historical site, but it’s well worth going the extra mile (or 2.5 km, to be exact) for. Although it might seem like an odd recommendation, there’s no better way to grasp Dublin city’s history than to take a walking tour of Glasnevin Cemetery, perhaps the most famous graveyard in Ireland.

Among the most visited of those laid to rest here are Daniel O’Connell, Charles Stewart Parnell, Roger Casement and Michael Collins. All prominent political figures in Ireland’s history, their fascinating stories are brought to life with the help of expert local tour guides. 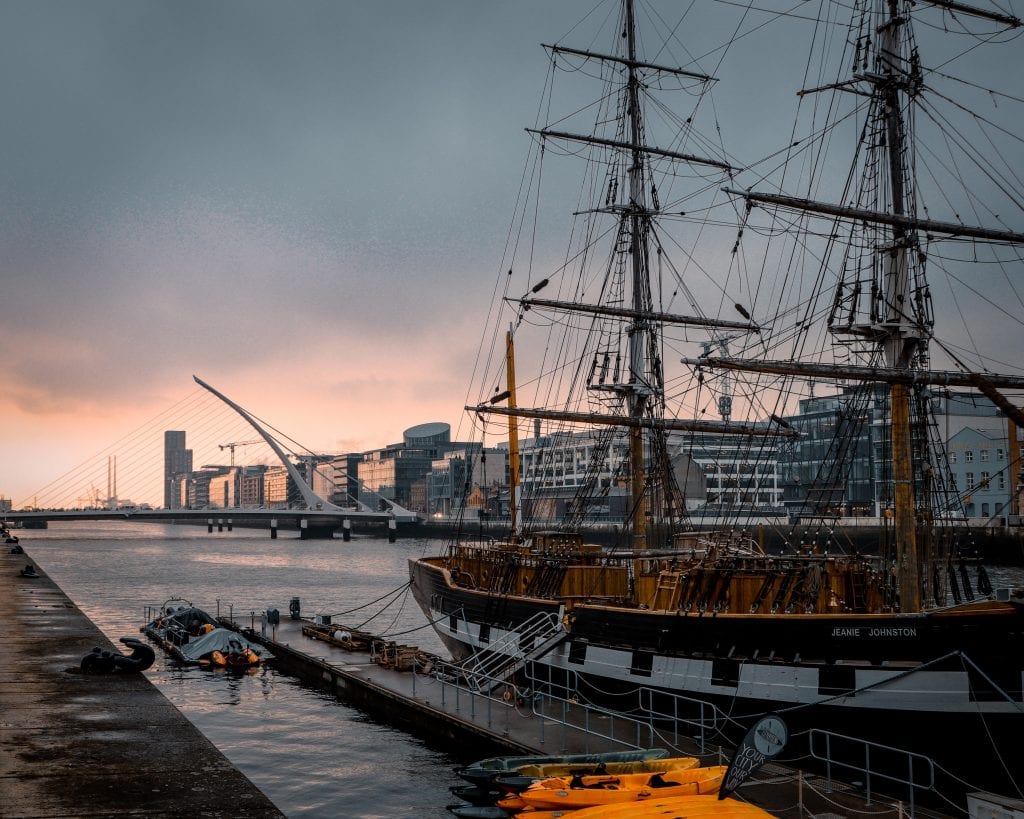 The Jeanie Johnston is a faithful replica of one of the Great Famine “coffin ships” that carried over a million Irish people fleeing starvation and desperate for a new life in North America in the mid 1800s.  It operates as a living history museum for tourists looking to gain a first-hand perspective into what it was like to make a transatlantic voyage to the “New World”.

Astonishingly, the original Jeanie Jonstone made 16 round trips between Ireland and Canada without losing any lives in the process – quite a feat in a time where diseases like typhoid and cholera, not to mention malnourishment, were rampant.

Bonus shoutout: One of the most thirst-quenching ways to soak up Dublin’s rich history is over a pint or two in the Brazen Head, Ireland’s oldest pub. 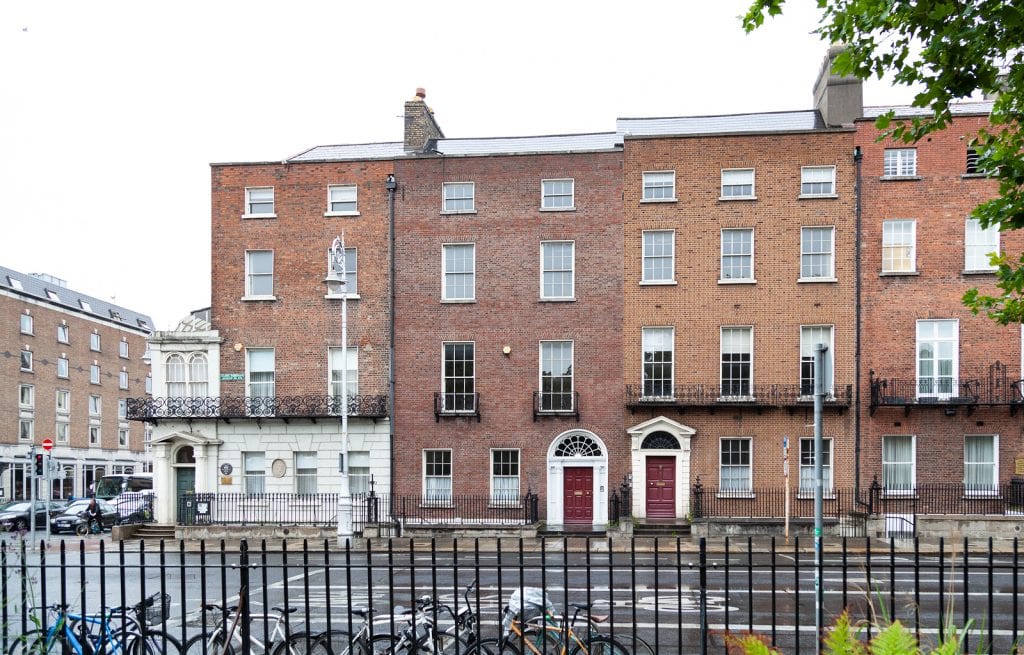 With Ireland’s rich literary heritage visible across the city of Dublin, visitors can immerse themselves in the world of their fictional heroes and walk the same streets that their favourite characters and authors once knew.

One particular highlight that every lover of literature will want to check out is the historic Georgian townhouse that was once the childhood home of the playwright, poet and novelist Oscar Wilde, famous for works such as The Importance of Being Earnest and The Picture of Dorian Gray.

Visitors take a guided tour through elegantly-preserved rooms, including the Wildes’ dining room, sitting room, and Oscar Wilde’s father’s surgery. From here, it’s a quick wander over to the corner of Merrion Square Park, where you can pay your respects and snap a pic with the multi-coloured sculpture of Oscar Wilde lounging jauntily on a rock. 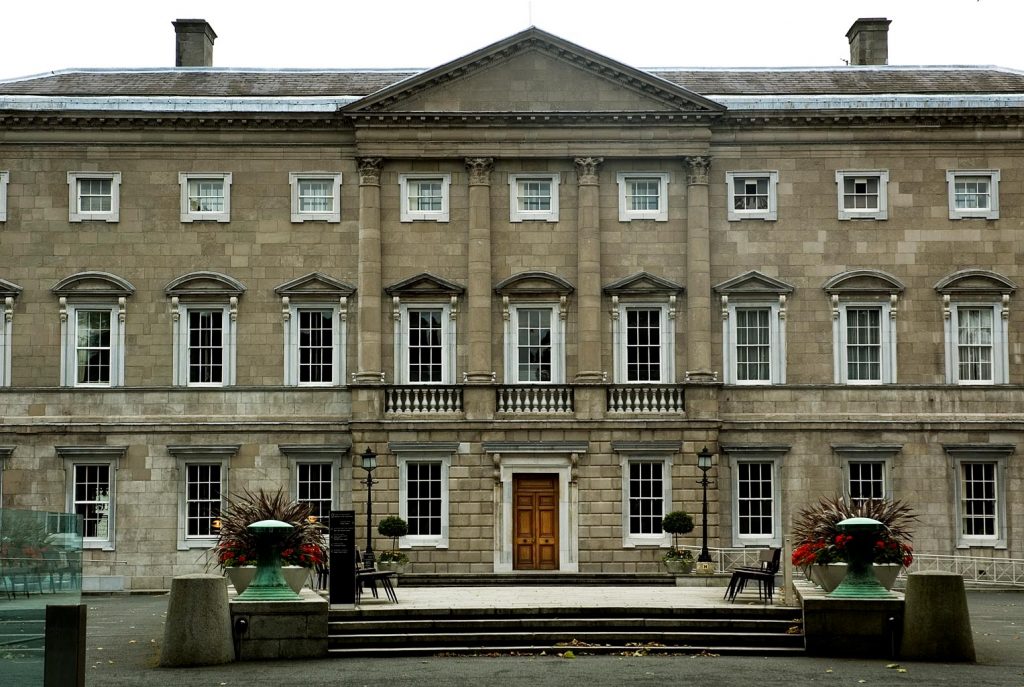 While you’ll have to plan your tour around when the Dail and Seanad are not in session, it’s well worth taking a trip over to Leinster House, one of Dublin’s most historic buildings, before departing from Merrion Square.

While it’s the current seat of the Oireachtas, the Irish national parliament, the building with its two facades was originally built as the Dublin city residence of the Duke of Leinster in 1745 and is reputed to be modelled on the White House in Washington, DC.

Tours of Leinster House have to be pre-arranged in advance and usually at their busiest in the afternoon so try to book one in the morning for a chance at a smaller group if you would like more opportunities to ask your burning history questions.

As you’ll see from the list above, there is always something to see and do for the discerning history buff in Dublin. While the city is filled with countless historic sights, its many museums are also a rich source of fascinating historical treasures and a must-see for anyone keen to learn more about Irish history.

Our top picks for Dublin museums to add to your historical hit list include:

We’ve got a number of hotels in Dublin city centre if you want to stay right in the thick of the historical attractions.

Otherwise, we highly recommend our two hotels outside of Dublin city centre, Newland’s Cross and Tallaght. These are ideal if you want access to both the city centre and other historical points of interest a little further out, like the War Memorial Gardens and Drimnagh Castle.