From the only intact city walls in Europe, to the awe-inspiring Lough Neagh, Derry is without a doubt a unique place, steeped in history, home to a variety of cultural and foodie attractions and filled with contrasts and surprises.

Here, we break down our favourite things to do in the ‘Oak Leaf County’ including tourist staples, shops, parks, restaurants, bars, and historical monuments. Get ready for an unforgettable adventure!

Where should I stay?

This hotel in Derry is centrally located within the city walls and an easy walk to all the major sights.

Things to do in Derry during the day 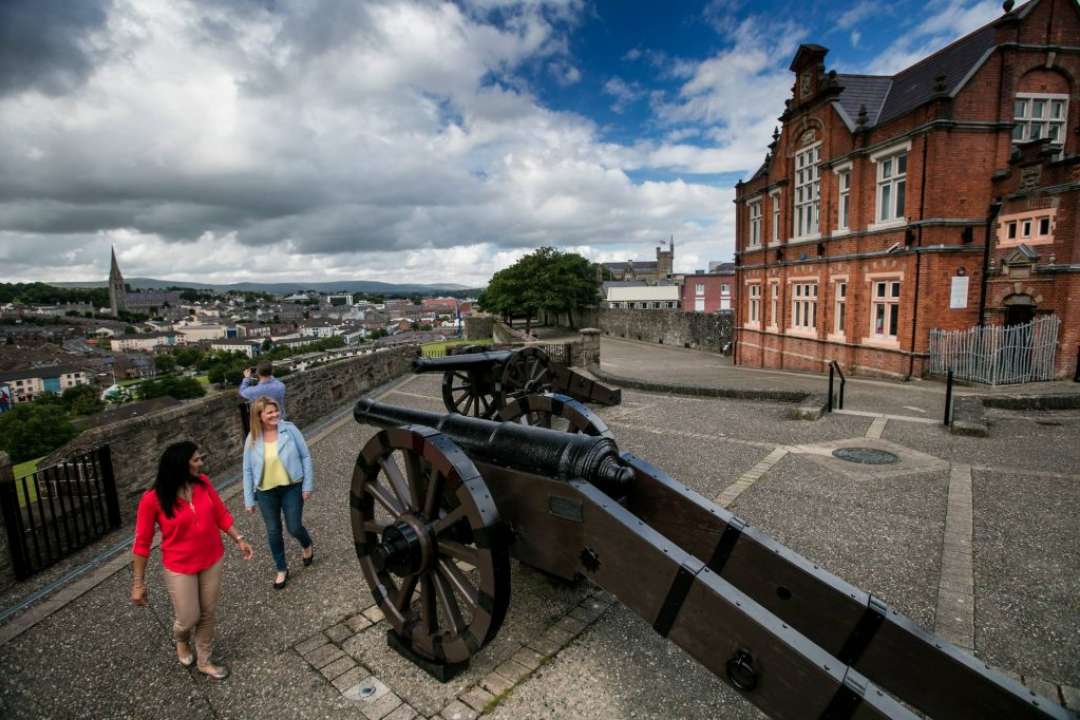 1. Delve into Derry’s past with a guided tour

A guided walking or bus tour of Derry is a great way to get a better sense of some of the best places to visit and learn about the history behind the city’s main tourist attractions, including:

Be sure to hold on to your ticket as some of the bus tours offer a hop-on-and-hop-off service if there’s a particular area you wish to spend some more time in.

2. Step up your culture and history game by going museum hopping!

Whether you’re keen to see artefacts from a Spanish Armada shipwreck at the Tower Museum or learn more about the plantation of Ulster in the 17th century at the Guildhall, Derry’s museums offer a diverse range of experiences for visitors.

Another museum you won’t want to miss is the Museum of Free Derry, whose exhibits offer a moving and stark reminder of the history and struggles of The Troubles in Northern Ireland. You can also explore a treasure trove of Derry’s past at the Siege Museum, which tells the story of the 101-day siege of Derry in 1688, a watershed moment in Ireland and Britain’s shared history.

3. Indulge in some retail therapy

If you’d rather avoid the Derry weather – which has a high chance of leaving you frizzy-haired and damp-footed – there’s always Foyleside Shopping Centre, home to some of Derry’s trendiest high-street shops.

Craft Village, reconstructed to look like a quaint 19th century square, is another firm favourite among Derry visitors, with artisan goods by local craftspeople ranging from crystal and pottery to art prints and everything in between (including bespoke flower crowns!)

Recommended reading: 11 Things Every Derry Girls Fan Should See and Do in Derry

4. Get back to nature at Derry’s parks and nature attractions

Northern Ireland is known world-over for having spectacular and diverse scenery, and Derry is no exception. If you’re looking to stay close to the city centre, we highly recommend a leisurely wander around St Columb’s Park, with its sprawling green lawns and onsite cafe that makes for a perfect lunchtime pit stop.

A little further southeast of Derry lies Ness Country Park, where you’ll discover swathes of wooded parkland (and a surprise waterfall!) that’s begging to be explored.

A 17th-century stately home that was once the exclusive domain of an aristocratic family, the Conynghams, today, Springhill House is managed by the National Trust and open to the public throughout the year. While Springhill houses an incredible costume museum, it’s also surrounded by the most tranquil rose garden with meadows and two designated walks that meander off into the flora and fauna of the surrounding countryside.

If you visit Derry in the summer with kids in tow, it’s well worth a trip to Springhill for the free obstacle courses, jungle gym and horseless show jumping that are bound to tire out any little gallopers in the family.

Things to do in Derry at night 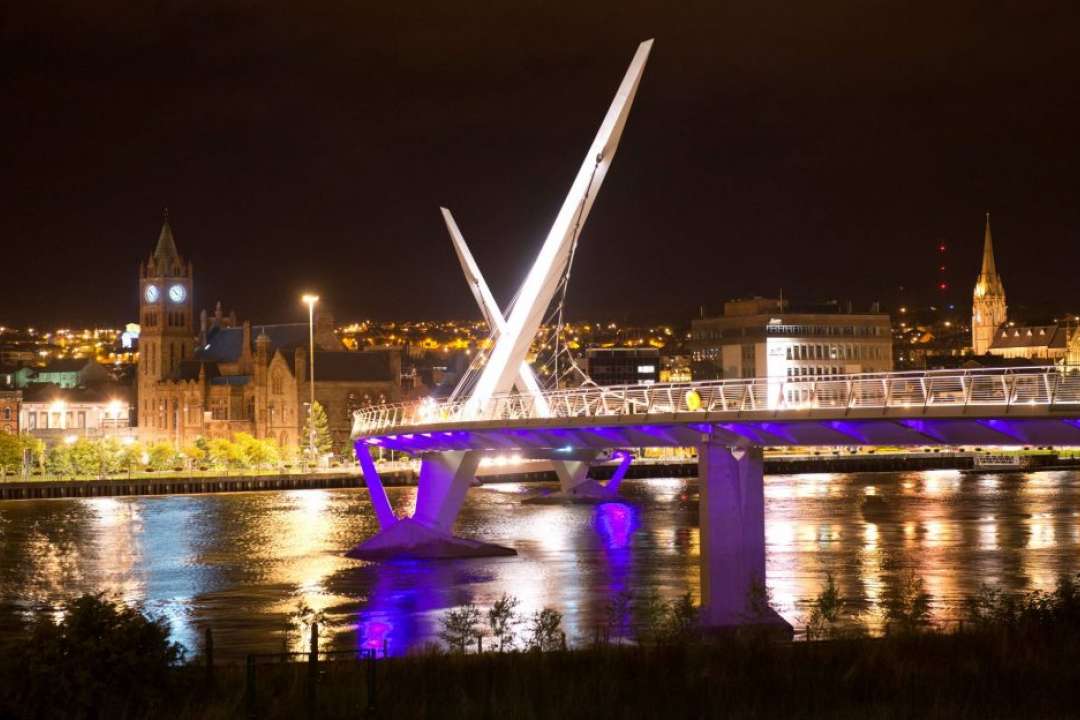 5. Shake things up with some after-dark sightseeing

Derry city has endless options for night owls. If you like your city tours with a little added ambience, then a Derrie Danders guided evening tour offers a fantastic overview of the big sights and hidden treasures only known about by the locals.

6. Eat and drink as the locals do

Of course, if you choose to linger after hours at Craft Village, it’s also the perfect spot for drinks, dinner or a light bite.

Otherwise, Brickwork, Primrose and Browns offer all types of delicious eats. If you’re not feeling too full, you can always party into the wee small hours at Sugar over Quay’s Bar, one of the city’s most popular night clubs.

If you’re looking for live music in the heart of Derry, Mason’s Bar or Peadar O’Donnell’s are always well worth a visit.

Basic information for visitors to Derry 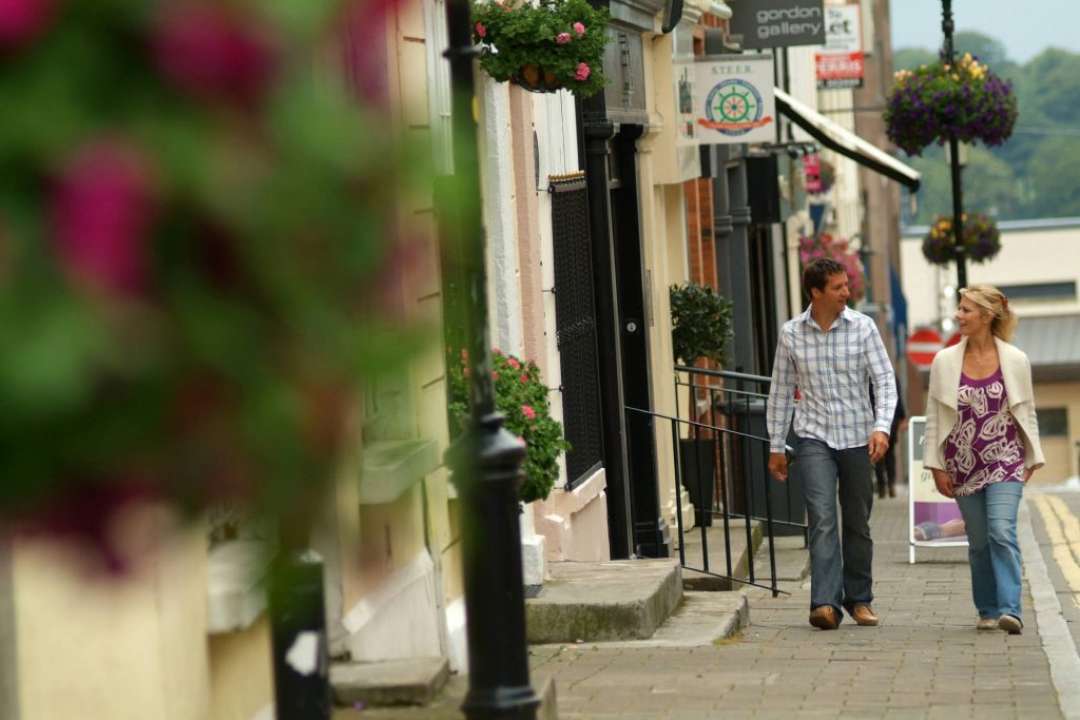 Here are some tips for visiting and getting around Derry.

What’s the best way to get to Derry?

Wherever you’re coming from and however you choose to travel, Derry is within reach by bus train, car and plane, with more than a few UK, European and transatlantic connection options.

What’s the best way to get around Derry?

Once you get to Derry, you’ll find that getting around the city is fairly simple. While there are plenty of options ranging from taxis and buses to bike rentals, Derry is a compact city and most of the sights and major tourist attractions are no further than a 15-minute walk apart. So get those comfy shoes on! There are also quite a few different companies offering hop-on hop-off bus services in Derry.

What’s the best time of year to visit?

Derry is a city that you can visit year round, with plenty going on throughout the year. If you’re hoping for warmer, drier weather, then the summer months will be your safest bet. The weather in Derry is unpredictable at best, though, so plan to pack layers and don’t be afraid of a little rain.

Derry is a city that you can visit year round, with plenty going on throughout the year. If you’re really keen to attend events such as the City of Derry Jazz Festival, the Foyle Film Festival and the world-famous Halloween Carnival, you might want to time your visit accordingly.

The Walled City Market at Guildhall Square, where you can while away a few hours browsing goods from local farmers, artisans and craftsmen, should also be on every food lover’s to-do list in Derry. However, the market only runs from February to December on the first Saturday of the month, so keep that in mind when planning your trip.

How much time should I spend in Derry?

This, of course, depends on how much you want to do and how much time you have for your trip. You could easily spend a week and not run out of things to do in Derry. That said, we highly recommend spending at least two days for sightseeing in Derry. With so many great attractions and museums to see (and places to eat!) most visitors who spend a rushed day in Derry city are bound to regret it.

What about day trips from Derry?

If you’re looking to get out into the countryside for a few hours, you can certainly use Derry as a base to explore some of the surrounding areas and regions around Northern Ireland.

Whether your preference is to book a guided day tour or get there yourself by car, bus or train, there are a number of excellent day trips you can take from Derry. Some of our favourite places to visit nearby include:

Some seriously breathtaking Game of Thrones filming locations. We love the Cliffs of Fair Head and Mussenden Temple in Castlerock (which serve as the backdrop for Dragonstone beach) and Murlough Bay in bearvy Co. Antrim (which became the Iron Islands in season three).

The Giant’s Causeway. Seeing this geological marvel up close is worth fighting the crowds for.

Buncrana. A vibrant and picturesque beach town located on Lough Swilly and a prime dolphin sighting location to boot.

A scenic golf course, like Portstewart, is a great spot to work on your swing if you’re so inclined. If teeing off isn’t your thing, then you can always take in the dazzling scenery (the restaurant overlooks Strand beach) while enjoying a nice meal instead.

And always remember to check the Maldron Hotel in Derry for the latest offers available when planning your next trip to this enchanting city.