The Bord Gais Energy Theatre, formally known as the Grand Canal Theatre, is Ireland’s largest performing arts venue. The theatre has the best of Broadway and West End shows, playing all year round as well as some local productions. It is the only Irish theatre with a stage capable of holding the large West End and Broadway productions.

The Bord Gais Energy Theatre can hold up to 2111 people and can hold a larger capacity than any of the New York Broadway theatres. The theatre is also Ireland’s busiest performing arts venue with up to 350 shows a year including, matinee and evening performances. Theatre’s diverse programme consists of theatrical experiences to meet everyone’s passions and interests including ballets, musicals, family shows, drama, concerts, comedy, orchestral and opera. Some of the upcoming performances include 9-5 Dolly Parton Musical, Mamma Mia, The Sound of Music, The Phantom of the Opera and Les Misérables.

Enjoy a delicious, show-stopping 2 or 3-course meal in the grain & grill restaurant in Maldron Hotel Pearse Street before the big performance. Our Table D’hôte Menu offers a tasty selection of starters, mains and desserts.

Treat yourself and someone special to one of these spectacular theatrical shows and enjoy a great overnight stay in Maldron Hotel Pearse Street. 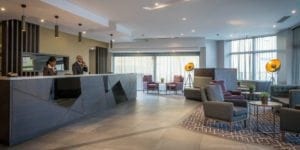 Maldron Hotel Pearse Street is one of the most centrally located hotels in Dublin city centre, nestled in between some of Dublin’s most iconic venues and just minutes from the main shopping areas and tourist attractions such as The Irish Emigration Museum or Trinity College and the Book of Kells at Trinity College.

Maldron Hotel Pearse Street is located less than a 5-minute walk from the Bord Gáis Energy Theatre, offering you the ideal base with great value rates.