There’s a lot to see in this little island, so chances are that you’ll want to take in the sights in Dublin and on the West Coast.

Ireland has plenty of transport options, but some are more reliable than others, and some places are easier to get to than others.

So, here’s a guide to getting around this little country. 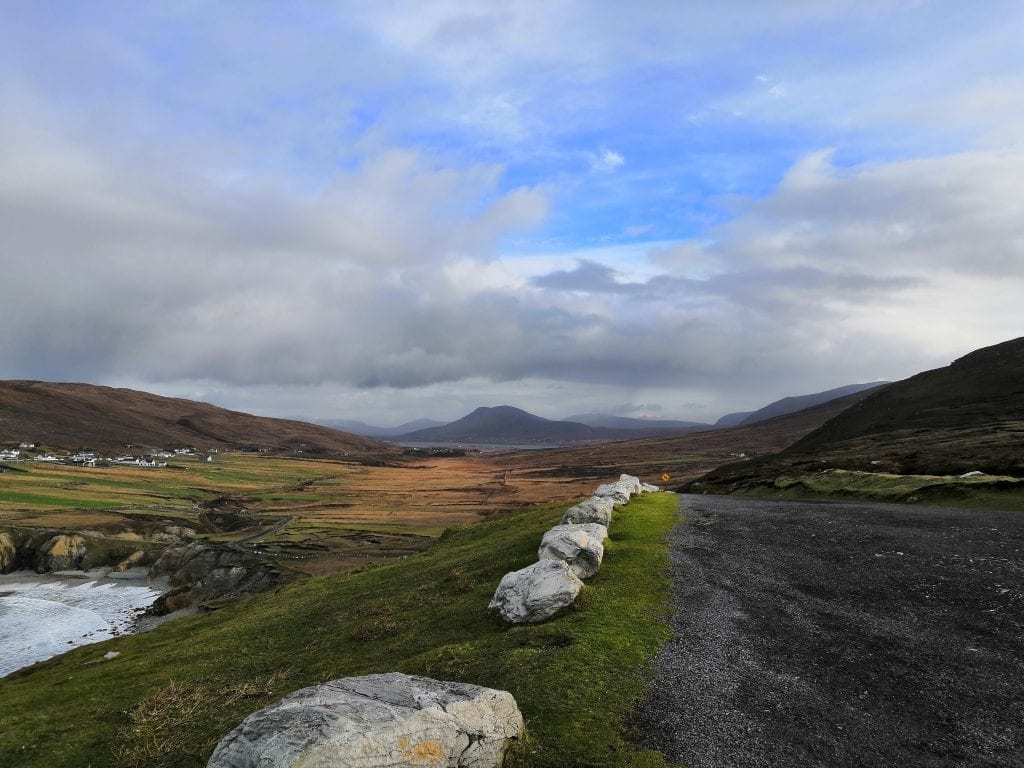 If you’re travelling beyond Dublin, and if your trip is more than 2-3 days, it might be worthwhile renting a car.

Yes, you can access just about any major attraction through shuttle buses or public transportation, but you’ll get a lot more out of your time, and a lot more locations will open themselves up to you if you have a car rented.

You can rent a car with an American or EU driver’s license. It’s worth noting that manual (as opposed to automatic) is the default car type here. Automatic is usually available, but only on request.

If you are driving around the West Coast of Ireland, it’s worth your while planning your journey and checking the maps ahead of time. While the situation is improving steadily, there are still some areas that could be better served when it comes to data / Google Maps.

Ireland is well served by motorways if you’re travelling from East to West (or vice versa, of course!). Roads within the counties are trickier, and some rural byroads have speed limits of 80kph, so drive carefully.

Getting Around Ireland with Public Transport 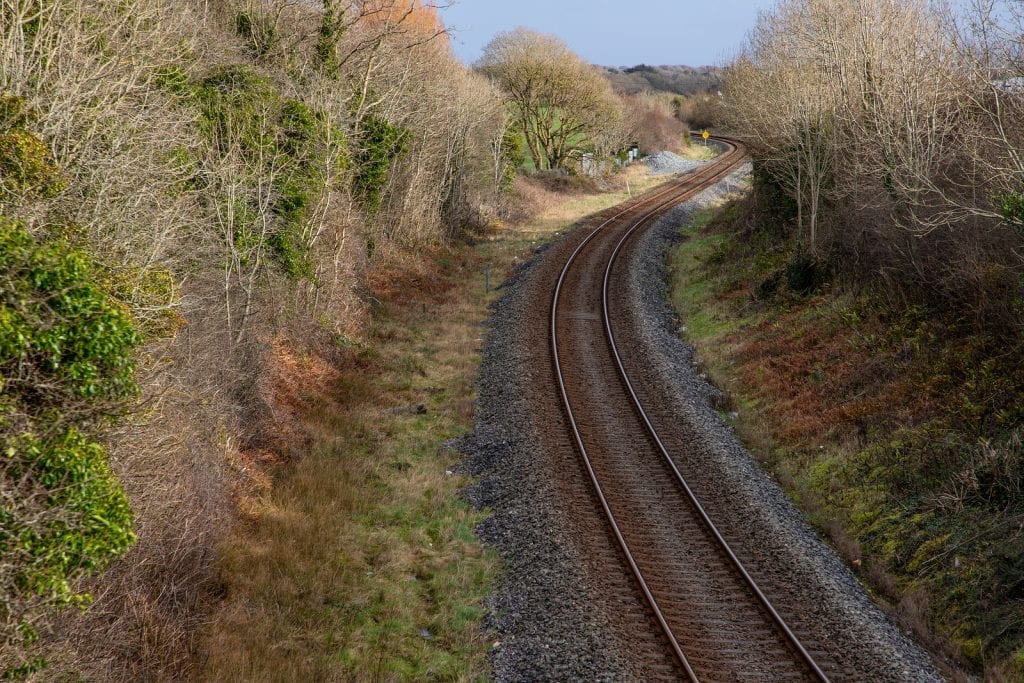 Trains in Ireland tend to be well-kept and comfortable. The ticket prices are higher than the buses, but on inter-county or commuter trains you get access to clean toilets and more leg room.

We recommend you book these tickets in advance, so definitely plan out your trips.

In Dublin, there are two main train stations.

In Limerick the main station is Colbert Station (not far from this Limerick hotel); in Galway it’s Galway Rail Station (located in Eyre Square and near this hotel in Galway); and in Cork it’s Kent Station, also known as Cork Station (just 1km away from our hotel on South Mall).

By the way, Limerick has some great tours, on both land and water, if you want to get to know the city.

This hotel on Shandon Street sits right in the city’s centre, a stone’s throw from transport links and the city’s best bars and restaurants. We’d recommend taking a tour to get a lay of the land, and we’ve written before about the best tours in Cork.

In some cases, such as the Express from Cork to Dublin, the bus can be faster than the train option. Buses can be a convenient way to get around, but on some locations they can be infrequent. Check the timetables beforehand so you don’t get caught out!

Best Ways to Get Around Dublin 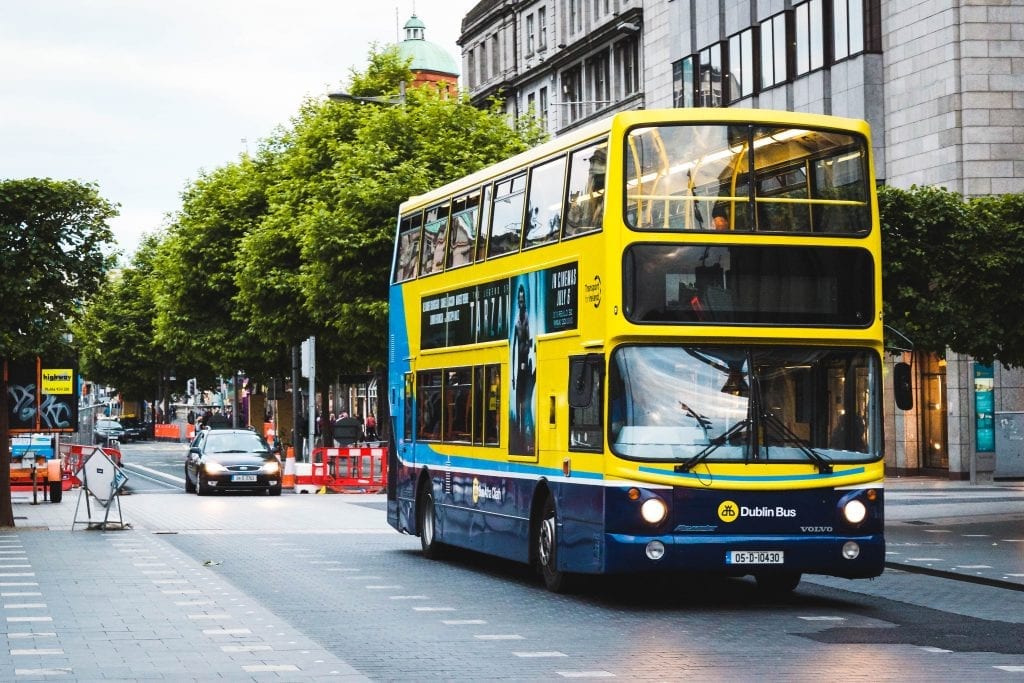 Arriving at the airport/getting a Leap card

If you’re arriving via Dublin Airport, and you’re staying in Dublin for a couple of days or more, it might be a good idea to buy a Luas card, which is usable on Dublin buses and Luas trams.

If you’re looking for accommodation that’s easily accessible, this hotel near Dublin airport will fit your needs.

When you get through in arrivals there be a Spar shop (you’ll see a lot of these in Dublin!). There, you can purchase a Visitor Leap Card – this card will let you use the city buses, DART trains (Dublin Area Rapid Transit) and Luas (tram/railcar) on an unlimited basis. These cards are also available in most newsagents and every Luas stop.

For Dublin stays, it’s recommended for a couple reasons. Firstly, the buses only take exact change. If you only have larger notes or coins, you get a paper receipt for your change that can only be reimbursed in person at an office in the city centre. Also, you don’t have to keep track of how much you’re spending on buses and travel. A Leap card is a simple swipe to get on/off buses and Luases, so you don’t have to fumble for change and tickets when your train is getting ready to leave.

The Leap cards only work on Dublin city transportation though – buses and trains to other cities and towns are separate.

Dublin is relatively small for a capital city, and much of its landmarks are within walking distance if you’re staying in the city centre. Maldron has hotels in central locations like Pearse Street, Parnell Square and the hipster neighbourhood of Smithfield. And, unsurprisingly, many of these hotels are in walking distance of some pretty iconic Dublin landmarks.

Dublin Buses run a good service if you’re travelling into the city, but is less frequent if you’re going from suburb to suburb or village to village.

The Dublin Bus app is worth downloading. It gives real time information based on location or bus numbers.

These city (yellow) buses do not give change, so try to have your exact change ready beforehand. Or invest in a Leap card.

The buses and trains all tend to have WiFi, though that can become patchy at peak times.

Dublin has a city tram service called the “Luas” (Irish for “speed”). It has two services, the Red line (east to west) and the Green line (north to south). A handy way to remember the two lines is by using landmarks: the Red line passes by the Red Cow Inn (near this hotel in Newland’s Cross); the Green line passes Stephen’s Green Park.

The Red Luas line will take you by Busarus (Irish for bus depot). This is where many buses to towns outside Dublin usually leave from (Cork, Galway, etc).

Taxis are readily available in most cities and towns. At busy times, or when you need to leave at a specific time, it’s advisable to book one. This can be done over the phone, online, or via an app. Each city will have their own service and the staff at your Maldron hotel will be able to advise you on the best service to use for that particular location.

Is there Uber in Dublin?

Uber is not available anywhere in Ireland, but many locals use the Free Now app to order taxis. (These taxis are not free! “Free” in this context means “available”.)

Ireland has a lot to offer, whether you’re taking the train, bus or a car, it’s an exceedingly road-trip friendly country. We look forward to seeing you here!