Fallen hard for the slice of 90s nostalgia comedy gold that is Derry Girls? You’re not alone on that front.

Not one to settle for being Channel 4’s most-watched comedy show in 15 years, Derry Girls also cultivated an avid fanbase further afield when the four raucous teenage girls and the “wee English fella” found a second home on US Netflix late last year. And with a second season worthy of all the social media adulation already in the bag, Derry Girls has become an instant comedy classic worldwide.

If you’re left wondering what all the fuss is about, then (in the immortal words of Ma Mary) catch yourself on. Because there are many reasons you HAVE to watch this show. We’ve listed but a smattering here:

And let’s add one more to that list – Derry, Northern Ireland’s second-biggest city, has finally made it onto the tourist map.

If, like us, you’re settling in for the long wait for season three and looking for some respite from a serious case of Derry Girls withdrawal, then Derry could be just the right weekend getaway to tide you over.

How to get there: There are lots of bus and train options for visitors from the Republic of Ireland. Derry is about a three-hour drive from Dublin. If you’re based in the UK, there are direct flights from London, Manchester, Glasgow and Edinburgh daily. International travellers can connect via the UK.

Where to stay: Located inside the historic City Walls, this Derry hotel sits within walking distance of the city’s top attractions.

As the only remaining walled city in Ireland, the city’s rich history, landmarks and booming music and foodie scenes make Derry an ideal spot for a quick city break. Derry city also happens to be the perfect urban addition to your travel itinerary if you’re planning a trip along the Wild Atlantic Way and Causeway Coast route. Looking for ideas for your next girls’ trip? This could be the one for you too!

Well .. there’s us , just on wall , yeno right in the middle of Derry , WTF !!! Thanks so much to @uvartscic for bringing this incredible mural to my lovely hometown Derry ☘️🇮🇪🍁 #derrygirls

If you’re on the hunt for the perfect photo op, then your first plan of action upon setting foot in Derry should be snagging your very own selfie with the Derry Girls themselves at their mural on the gable wall of Badger’s Bar. Located right in the heart of the city and commissioned to mark the second series of the show, the Derry Girls mural has quickly become the best spot for an Instagram-worthy photo in the city.

Of course, it’s not the only mural you should be checking out in Derry… 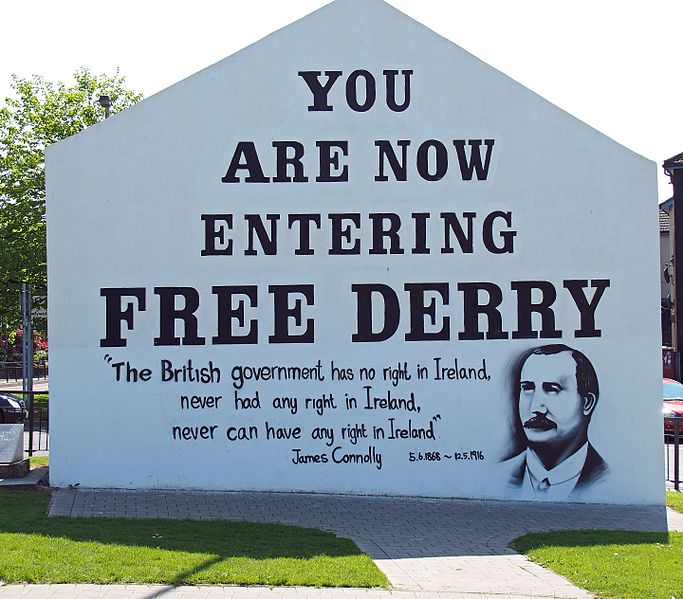 If you’re looking for an illustrated guide to the Troubles in Northern Ireland, then we highly recommend a walking tour of the Bogside Murals.

Key events in Derry’s politically-charged history are commemorated with these powerful images, including the Battle of the Bogside, the 1981 hunger strikes and more. We recommend getting a tour guide who’ll help you interpret the murals and talk you through the history of the Troubles.

The Museum of Free Derry is also located smack bang in the middle of Bogside. For a moving overview of the “Bloody Sunday” incident in 1972, a fateful day in Derry’s history, this is well worth a visit. 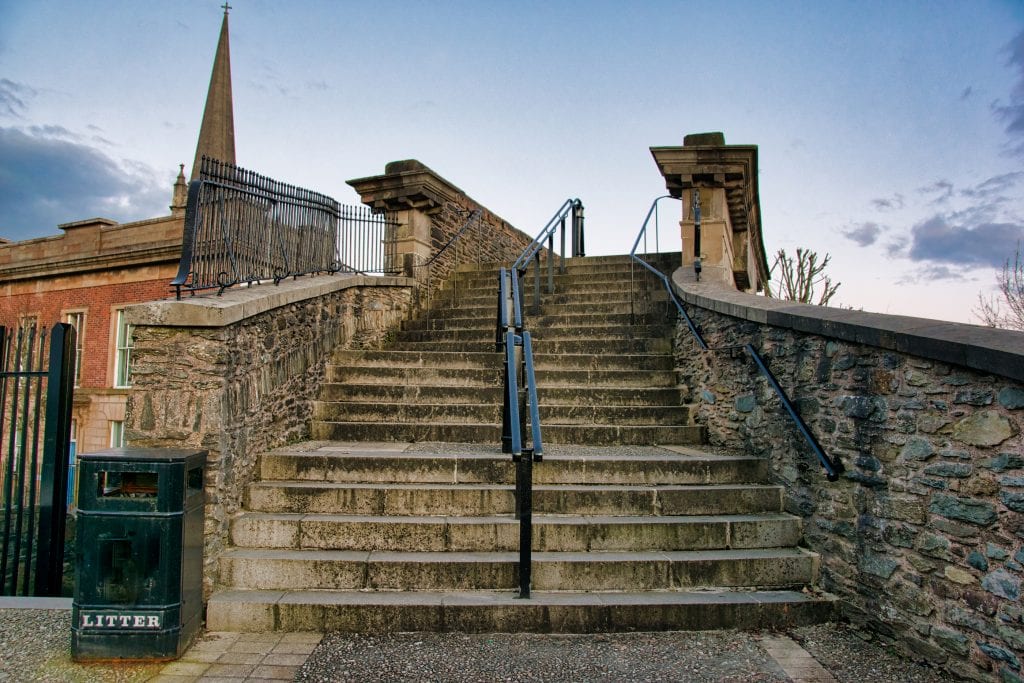 Not only is Derry the only remaining walled city in Ireland, it’s also the last walled city to have been built in Europe, full stop. They’re remarkably well preserved and hold the largest collection of cannons on the continent. We recommend taking a guided tour to get the most out of your visit.

Sidenote: If you buy your tickets at the Maldron Hotel Derry, you’ll get a free cup or tea or coffee at Jamm, a nearby cafe! 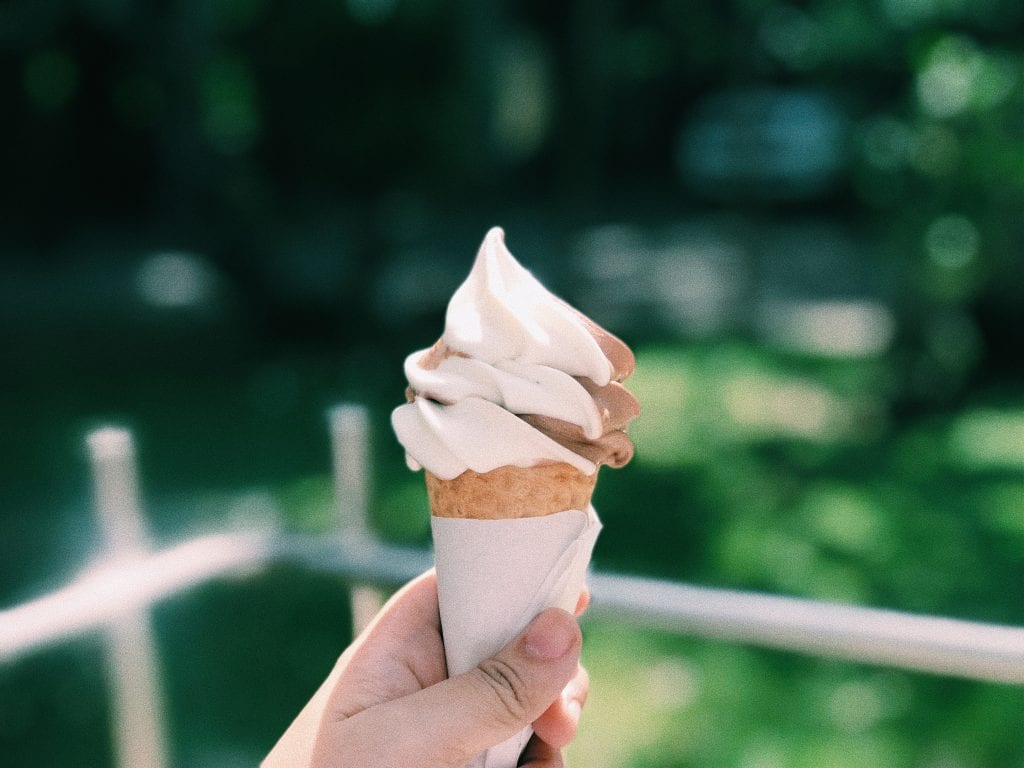 If you’re anything like Grandpa Joe, you might have a hankering for cream horn (a heavenly concoction of puff pastry and whipped cream filling) while you’re traipsing around the town.

Luckily, you can grab one at Joe Jackson’s ice cream shop on Ferryquay Street. 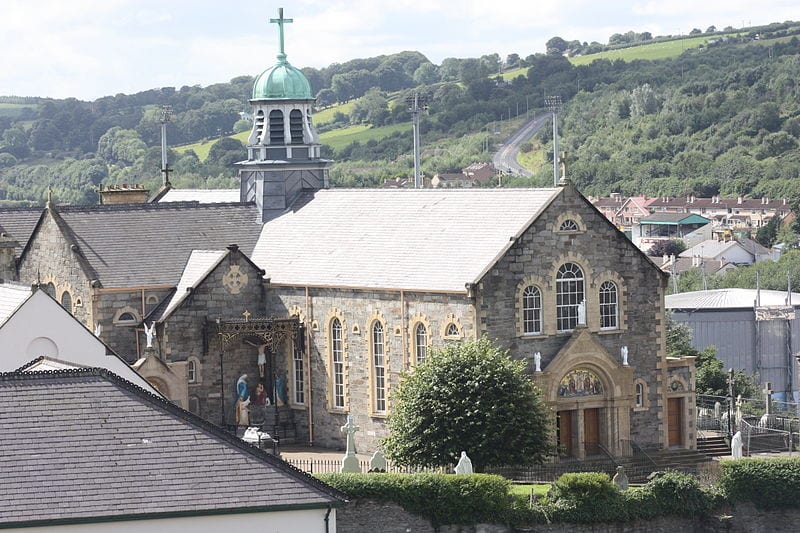 High on our list of Derry-Girls-themed landmarks is Long Tower Church, where Toto the dog was resurrected under highly suspicious circumstances. A brisk 10-minute walk from Bogside, this church is the oldest Catholic place of worship in Derry.

If, like Sister Michael, you love a good statue, then look no further.

Some shop names just wouldn’t work at home … But it is at Bogside! #weeshop #dennissweeshop #oops🙊 #bogside

You won’t want to miss snapping a photo or two in front of Dennis’s Wee Shop, a regular haunt for the show’s main characters. If the cream horn earlier wasn’t enough of a sugar fix for you, you can find all of your favourite retro confectionery here. 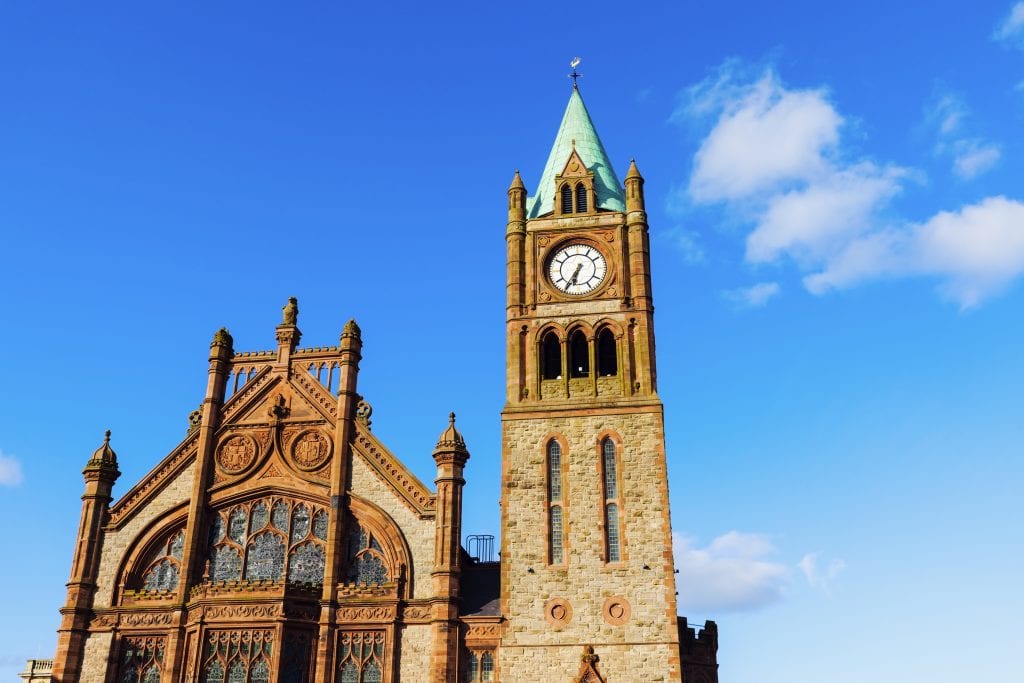 The striking neo-Gothic Guildhall has been the site of many key cultural and historical events in Derry and is well worth taking the time to visit. A notable moment for the Guildhall was undoubtedly Bill Clinton’s visit in 1995, which provided the setting for the season two finale of Derry Girls.

8. The River Foyle and the Peace Bridge 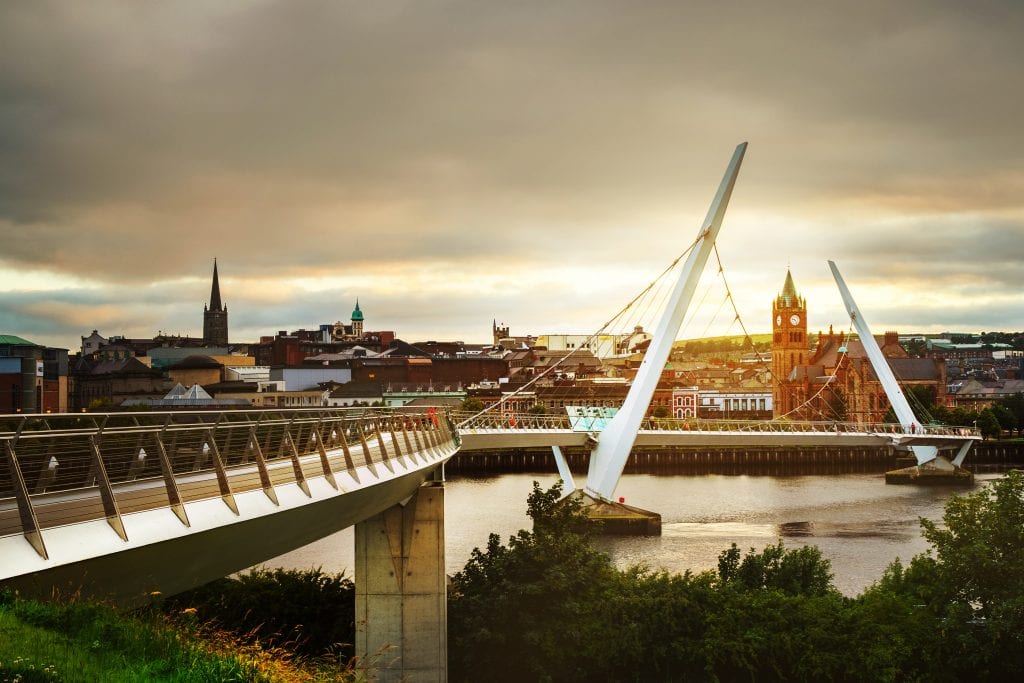 For a reminder of how far Derry has come since the mid-1990s, all you have to do is take a walk across the river Foyle. The river cuts the city of Derry in two and has historically acted as a physical boundary between its Nationalist and Unionist communities. Built in 2011, the Peace Bridge runs across the river and stands as a moving symbol of togetherness and hope in this long-divided city.

It’s also the easiest way to make your way across to Ebrington Square on foot, where our next recommendation is located…

Can’t stop posting pictures of the view in this weather! That #sunset last night though… Looking forward to another one tonight! #pintswithaview #sorrynotsorry

The Walled City Brewery, which we’ve name-checked in an earlier post on Ireland’s best breweries, is a great spot to check out if you’re keen to mingle with some locals and experience the unique Northern Irish sense of humour and hospitality first hand.

Be sure to sip on Derry-Girls-themed beers, including the Sister Michael (a dark and decadent coconut stout) and the Wee English Fella (a pale ale with notes of strawberry). 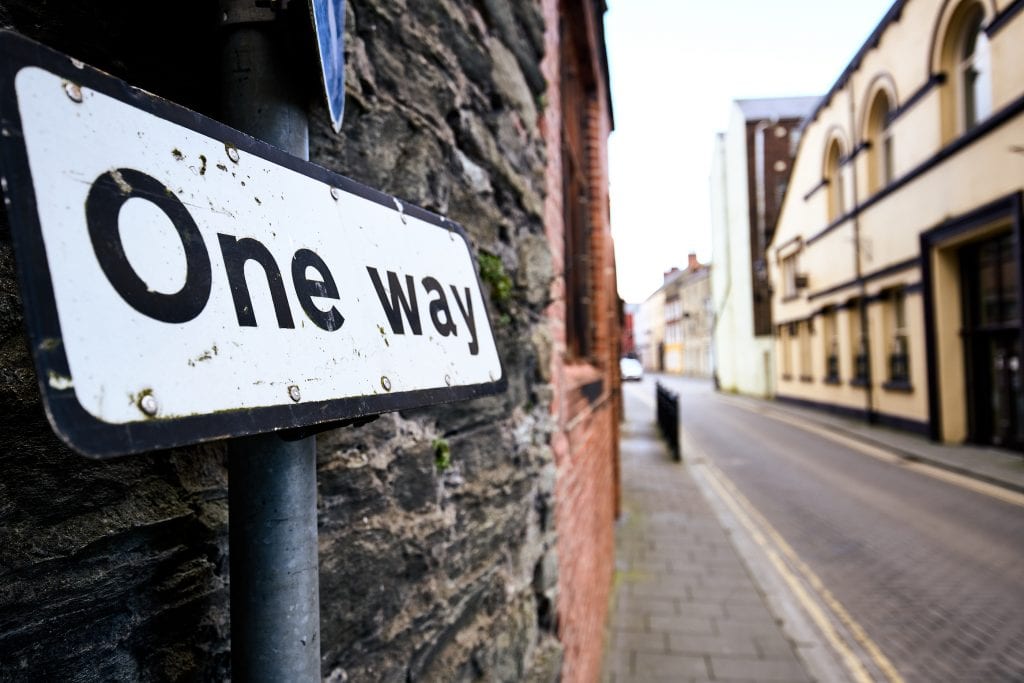 Who doesn’t love fish and chips? No one does it quite like the Irish, and Fiorentini’s is as close to Fionnula’s chip shop as you’re going to get in Derry. This is the kind of fried food that is perfect after a night out in the Walled City Brewery. 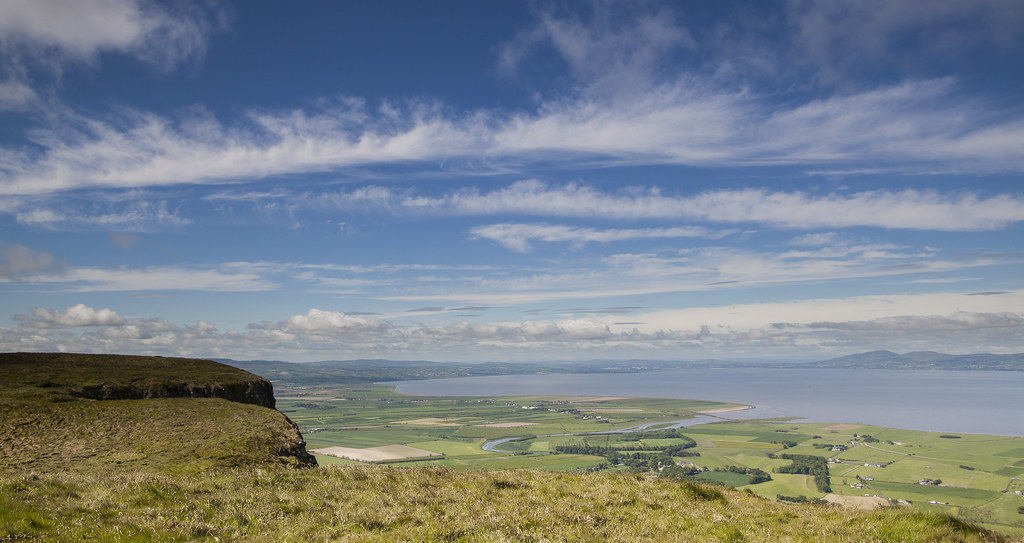 If you have an extra day to spare in Derry, why not spend it hiking Binevenagh, one of the most scenic spots in Northern Ireland? We took inspiration for this particular recommendation from the opening episode of season two, which saw the girls from Our Lady Immaculate convent school taking part in an outdoorsy weekend with a group of boys from a nearby Protestant school.

Located 45 minutes outside of the city, Binevenagh is an approximately four-mile walk and the route includes beautiful views of Lough Foyle and (on a clear day) the Scottish coast.

One last question! Should I do a guided Derry Girls tour or go it alone?

There’s no right or wrong answer here. Of course, exploring Derry on your own means you can go at your own pace and pick and choose the attractions that pique your interest the most. As the city centre is quite compact, it’s easy to get around by foot. A great way to see the city is to plan your can’t-miss attractions first and then work your way backward, filling in nearby museums, eateries and sights to see in between.

Derry Guided Tours, however, are currently offering a Derry-Girls-themed walking tour if you’re so inclined. For only £15, they’ll take you to quite a few of the iconic locations depicted on the show we’ve highlighted above.

Either way, whether it’s your first time in the city or you’re returning for another fun break, there are plenty of Derry-Girls-inspired ways to see this cultural city and make it a break you’ll never forget. Enjoy!