If there’s one thing Ireland is not short of, it’s traditional pubs. Our pub to person ratio is the envy of the world, and this is one country where you won’t go thirsty.

Thankfully, we’ve kept the spirit and atmosphere of traditional pubs alive. Indeed, some of our favourite bars are older than some major countries (many are older than America, for instance).

Here’s a rundown of some of our favourite old-school watering holes across the country. 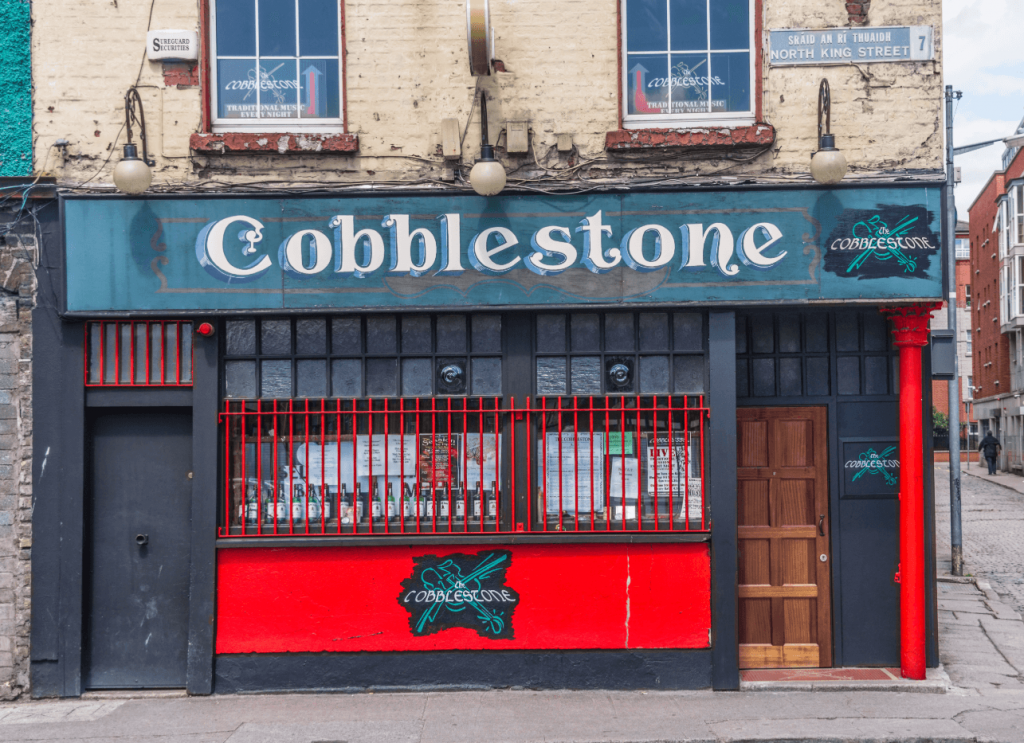 An essential pub for any visitor, The Cobblestone has all of the ingredients of a fine Irish pub – cosy corners, quality pints and a varied, unpredictable line-up of live trad music. These vary from in-pub live sessions and singsongs to gigs in its little music venue, all a short walk from our Smithfield hotel. Stoneybatter and Smithfield are bursting with creative types, so the Cobblestone also plays host to literary and creative events. 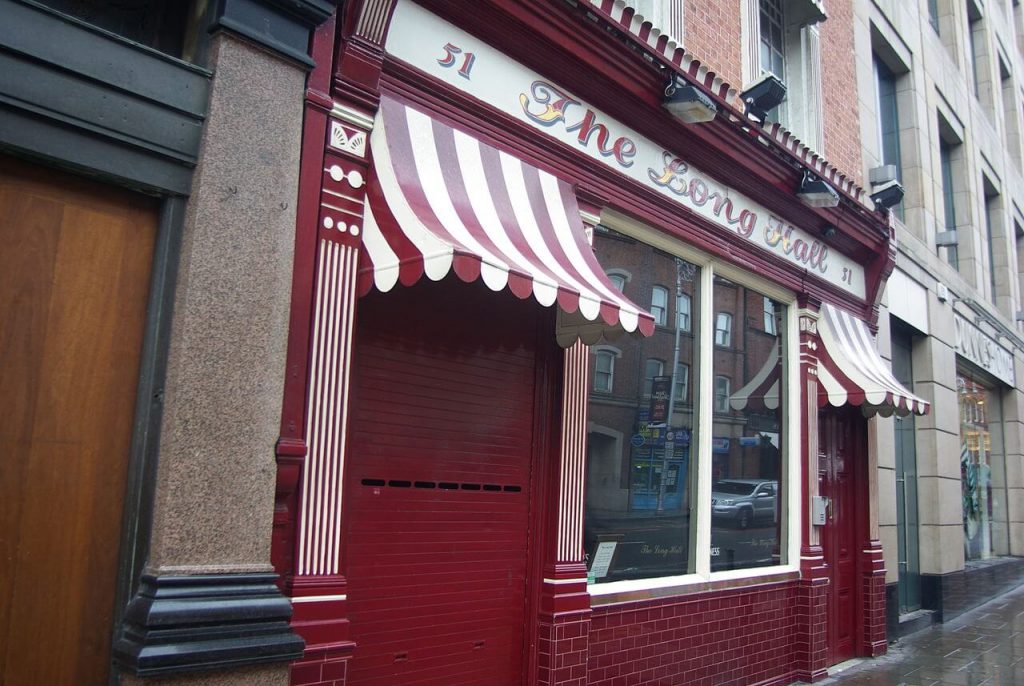 The Long Hall is at the nexus of one of our favourite streets of Dublin -where George’s Street meets Fade Street, and a few minutes from our Kevin Street hotel.

Even in a part of the world bursting with fine pubs and restaurants, the Long Hall constantly draws a crowd. Expect red décor, the beautiful sound of pub conversation and wooden tables and chairs.

Prime locations within The Long Hall are by the window or at the bar, but it’s worth a visit wherever you stand or sit. 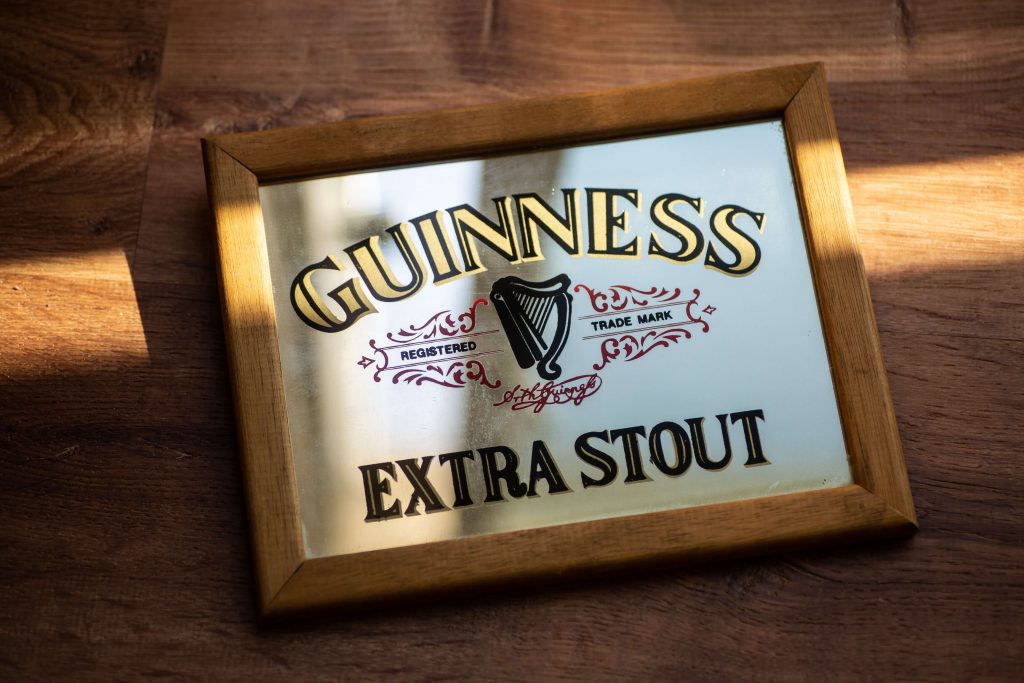 As their website proudly says, this Galway pub does not have a TV. Instead, it’s got live traditional music, a tremendous atmosphere and more knickknacks than you can shake an old teapot at.

This big, boisterous bar is a favourite among locals and visitors. And you never know who might swing by – Ed Sheeran famously recorded Galway Girl here. You can practically see this pub from one of our Galway hotels. 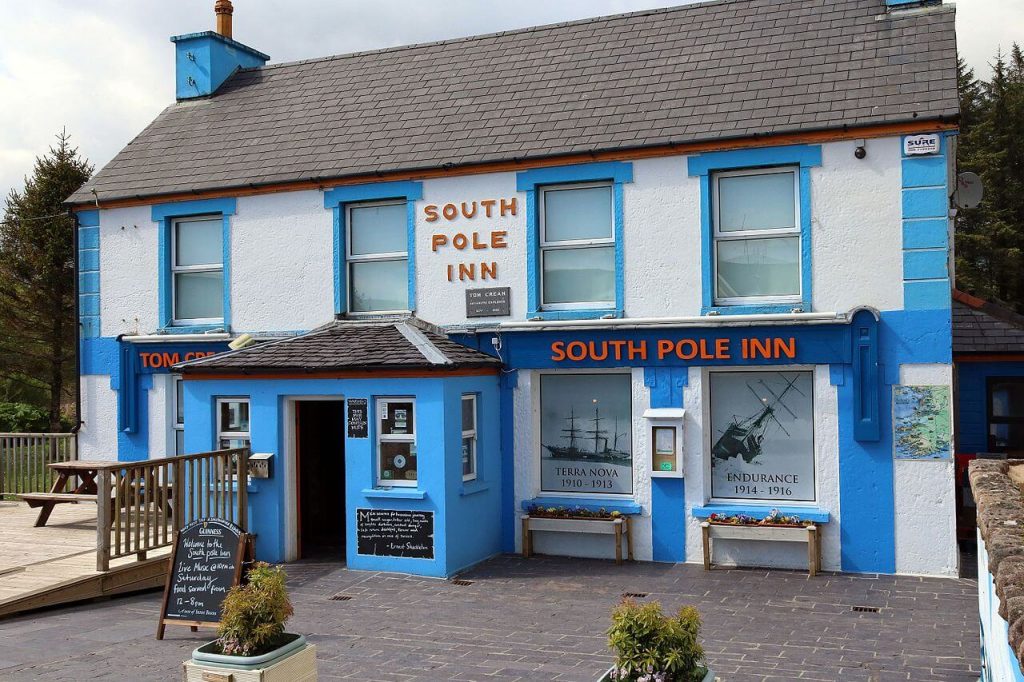 A great pub often has a great story, and the South Pole Inn has some fine heritage. The former home of legendary Irish explorer Tom Crean. After travelling the world, including three Arctic expeditions, the “Irish Giant” returned to Annascaul, between Galway and Dingle to establish this famous pub.

Its original owner spent so many months on cold climates, that cosiness was probably a priority in his pub! So, the South Pole Inn is welcoming, warm and old-fashioned, with a hearty menu of bar food. And Annascaul, incidentally, is a walker’s paradise, with glorious views in all directions.

Dolan’s has been a stalwart of Limerick for many years now, hosting live trad sessions and rock gigs regularly. As a pub, it’s won several awards, both from travel writers and readers’ polls. And it comes highly recommended by the TripAdvisor community.

Its three venues (the Warehouse, Upstairs at Dolan’s and the Kasbah Social Club) have hosted countless acts over the past couple of decades, from trad to indie to rock to comedy and beyond.

Dolan’s is very popular with guests who stay at our Limerick hotel.

The Sky in the Ground, Main Street

Like many of the best Irish pubs, The Sky in the Ground has a wonderfully poetic name. It’s named after a song by a local musician, Pierce Turner.

Despite being around since only 1996 (very young for an Irish pub!), many visitors think that The Sky in the Ground is much older, thanks to its décor and furniture. In fact, many of the pub’s second-hand furnishings pre-date the establishment. This gives the popular bar a cosy, old-school feel.

This is an old-looking pub with some new ideas. And you might be pleasantly surprised at their selection of craft beers and whiskeys.

The team in our Wexford hotel will tell you how to get there.

This bar has live trad music every night of the week in an old-fashioned “shop pub” setting – so expect décor, objects and posters from years gone by. And flags, oddly enough. Lots of flags.

Despite its quirkiness (or maybe because of it), Peader O’Donnell’s bar is often the first port of call for Derry’s visitors, keen to hear a song, a reel or maybe even a yarn from one of the locals. It’s also got a contemporary live music venue, if trad isn’t your thing.

Like our Derry hotel, Peader O’Connell’s can be found in the city’s centre.

There’s a myth that old-fashioned pubs are also run down. But one look at the Crown in Belfast will put that theory to rest. Beautiful carved wood, stain glass windows and a high-end tiling greet visitors to the Crown.

One of its most interesting fixtures is also one of its oldest: you can seclude yourself from the rest of the bar in one of its booths (or “snugs”). They say that these snugs were for drinkers in Victorian times to enjoy their stout discretely.

The Crown is just a short walk from our Belfast City hotel.